Twice a year here in Pittsburgh they have two big consignment sales — Just Between Friends and Snugglebugs.  These sales are strictly for children and both sales offer the final day to be 50% off most items!   In the spring I scored some serious deals at Snugglebugs and it was so close to my house, I was pumped to go back.

Unfortunately for them, they lost the space they usually use and had to break the sale into different days.  This resulted in a “baby sale” that offered baby gear and clothes up to 12 months.  Since Lily is just starting to wear 12 months I normally would have still gone to check out the half price deals, but JBF happened to fall on the same weekend, and since they offer all the way through juniors, I went there instead.

They had SO MUCH stuff and the line to check out was around the building!  I wish I would have gone to this one in the spring because I think they actually have double the stuff that Snugglebugs did, however I was unimpressed with their clothing selection.  Many of the clothes were stained and you really had to check everything out.  Also, and this is my fault not theirs, everything was really picked over!

Regardless of the limited selection, I was still able to score some serious deals for Lily. 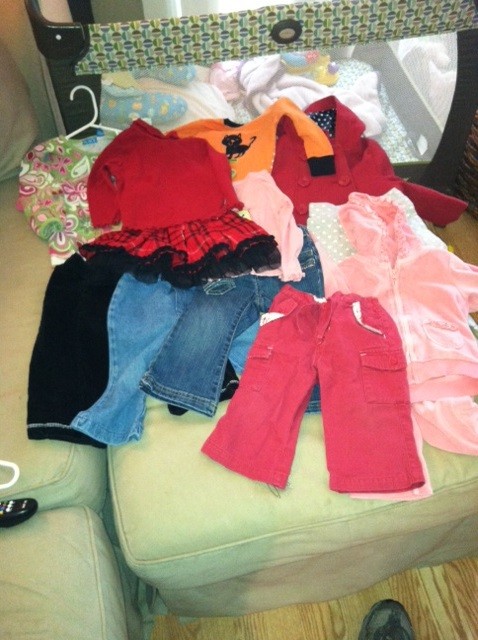 This was definitely a smaller haul than I anticipated, but I only spent a whopping $21, which is significantly lower than the $40 budget I set for myself!

I really went looking for a winter coat, but since everything was so picked over literally the only coat I could find in her size OR the size above was the red pea coat!  It really is cute and the best part about it is that it was only $2.50!  Yep, that’s right TWO DOLLARS AND FIFTY CENTS!  Now if that’s not the deal of the century then I don’t know what is!  To be fair, it is a little worn and it had those fuzzy balls like the previous owners put it in the dryer even though the tag clearly states not to!  That’s ok… nothing my sweater fuzz eater can’t handle!  And I know Lily will get a lot of wear from it because we do dress up a lot and she can definitely wear it every week to church!  Here she is up close: 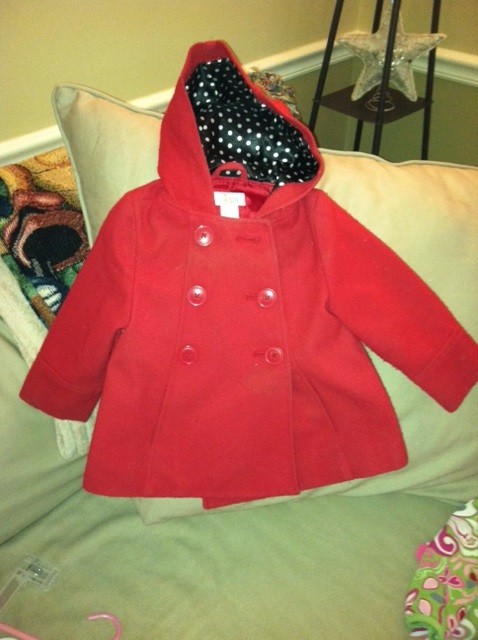 All-in-all I’m pretty happy with my fall deals.  I am still on the lookout for a good winter coat and a cute pair of leg warmers, but other than that, this girl is set!

What are some of your weekend deals?