I always dreamed of baking with Lily.  Putting on our matching Disney aprons and making amazing creations in the kitchen.  All the things I wanted to do as a child but never got to.  I was never allowed in the kitchen at my grandparent’s house while my gram was cooking.  At home, my mom’s idea of cooking was pizza so aside from calling in the order, I never got to have that special kitchen bond.

Somehow, though, I learned to cook and I love it.  I love making creations in the kitchen and having my family devour them!  I am awesome at following recipes and can sometimes even make up my own.

So when Lily had absolutely no interest in being in the kitchen, I was defeated.  I quickly realized most of the problem was that she didn’t know what we were going to do.  I showed her how to stir and she became obsessed.  We stirred, we used the blender, and after I poured the batter in the cups, we licked the spoon.  This was clearly her favorite part.  Normally I wouldn’t let her go at it with the spoon as raw eggs are less than ideal for you, but I found this recipe that replaces the eggs and oil with Greek yogurt!  I took this as a sign that these are not only *healthy* for me, they are also completely batter-licking friendly! 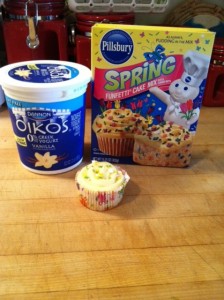 And they could not be easier!  I used Funfetti mix, my favorite, but you can substitute any cake mix you want.  Mix the powder with one cup of water and one cup of Greek yogurt.  Beat it together, fill your cups and bake according to the box!  One thing I did notice is that they do not rise as well as regular cupcakes do so you want to put more batter in if you want them bigger.  I like little cupcakes so I only filled them up a little more than 1/2 way.  Also, depending on your oven, you need to bake them the longest time on the time span given.  I normally look at the time span (18-21 minutes on my box) and take the middle number.  After this batch I would definitely put them on the full 21 minutes!

They came out amazing moist and delicious!  I took them to a cookout with our neighbors and they couldn’t believe how good they were!  Besides cooking them a little longer the only change I would make is that Kevin bough vanilla flavored Greek yogurt and next time I think I would use just the plain yogurt. Regardless they were great, just a wee bit sweet!

Best of all, Lily had a great time and brings me her apron every time I go into the kitchen to make dinner!  I so look forward to many more days of cooking, baking and creating together! 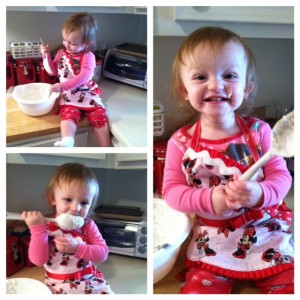