Our trip last month to Orlando was the first time we ever took Lily on an airplane, since the first time we drove down.  I was nervous about all of the logistics of air travel, as it is so much easier to throw everything in the car, point it south and go.  But when it comes down to it, an hour and a half vs. 15 hours there is just no contest!

Our flight was at 6 a.m., so we needed to be at the airport around 4 because I am one of those crazy nervous people that insists on being there the full two hours prior to departure, just in case something happens.  In case you weren’t sure, 4 a.m. is totally inconvenient with a baby… especially when that means leaving your house at 3! 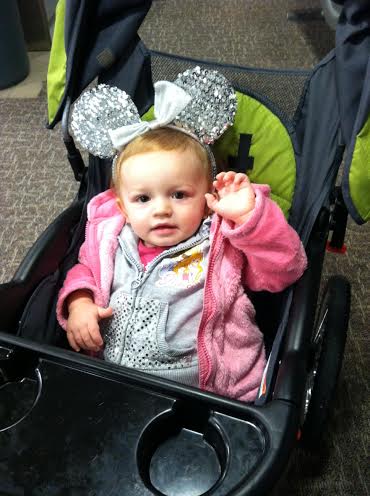 I had done my research prior to leaving and had everything I thought I would need and was allowed to take through security for Lily.  I had a copy of her birth certificate since she was an in-arms infant for our flight, copies of her social security card (because I told you I was crazy and over-prepared for the world), and all of the normal stuff we would need for a full day and night in case our luggage got lost.  I did pack plenty of snacks so we wouldn’t have the added expense on the trip but packed them in our checked bags just in case I couldn’t take them through security.

We got through the line really fast because not too many people are flying out so early on a Thursday.  Lily and I went through the metal detector, I got picked to be bomb screened (every so many people in each line), obviously passed and waited for Kevin.  That’s when I looked over and there were all kinds of lights blinking and our diaper bag being treated as if it were an explosive device.  Then it dawned on me — there were bottles of milk in there!  Once the milk and wipes were tested we were free to go on our way, but it did hold us up about 10 minutes while they examined everything!  I definitely learned for the way home and we breezed through security in Orlando.

So, 5 things you need to remember when traveling with an infant:

1.  Pull all bottles of milk and wipes out and place on top of the diaper bag.  This way, it goes right through and they don’t question anything.

2.  You can totally use the wheelchair only lane in security if you have a big stroller.  It’s awesome and helped a lot at a busy airport like Orlando!  And best of all, everyone traveling with you can use it too!

3.  You have to take your kid out of the stroller and they will look in every compartment and do explosives tests on the handlebars.

4.  The more prepared you are the quicker you get through and not all airports are the same.  For example my friend had to toss all of her son’s yogurt bites at security.  We had no questions about our little treats and Lily enjoyed them on the plane the whole way there!

5.  The friendlier and more cooperative you are, the easier time you will have.  The lady at Pittsburgh International was not so nice about the diaper bag at first, but when met with a friendly smile and calm attitude, she relaxed and got us on our way quickly.  I’m sure she is often met with a lot of resistance.

All in all, flying with an infant was not all that bad!  It took some time and planning to make sure we had everything we needed for a full day in case luggage was lost, while still maintaining the TSA rules, but by planning we had a very easy trip through security and on our way! 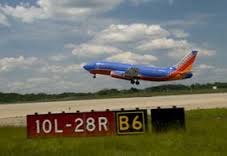