It is unbelievably easy to spend a ridiculous amount on Easter, making it seem more like Christmas than the simple Easter bunny.  We are a no candy family at this point because Lily is only 18 months so she does not need the sugar.  I also grew up with only one piece of white chocolate (my favorite), a pack of peeps and a little bag of robin’s eggs.  I did get many small presents and, truthfully, I didn’t miss the candy!  I plan to do the same with our kids.

This is where the spending gets hard.  It is so easy to over-compensate for not hitting the traditional Easter basket candy haul that I feel like Lily needs a million things in her basket.  To battle this, we set a $25 limit for Easter.  This is probably a high limit for a small holiday and will go down as she gets older, but it is hard to keep “baby” things cheap and still fill her basket.

And, like always, I went overboard.  I didn’t overspend – in fact I was UNDER the $25 limit, but Lily got a huge haul.  Thanks to coupons and shopping ahead, here is what our kid scored: 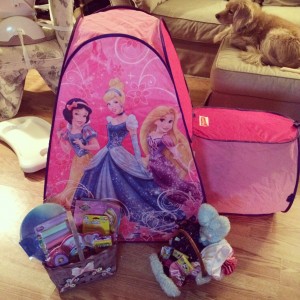 Here is the breakdown:

Disney Princess sidewalk chalk – %0.50 at Walgreens at the end of summer last year

As you can see, I spend the majority of my shopping time at Target and I score some incredible deals there!  The key for me is to shop early… like as in a year early!  They had some seriously cute Easter baskets at Target and it was really hard to not splurge to get Lily one.  I use my old Bunny basket (never realized how creepy the bunny looks!) but I would like her to have her own.  Looks like I’ll hit that up later this week when they are all on super markdown!  I will also look for some small Easter things for next year’s basket – a stuffed animal with bunny ears, small Disney Princess toys, things like that.  They go 70-90% off at Target and I will just put them in a bin in our basement until next year!  Saves a TON of money to shop ahead!  Also a great idea for stocking stuffers if the items aren’t holiday specific.

I did put three pair of PJs and a flamingo dress in the basket also, but I didn’t really buy those as presents, she needed the pj’s and I needed her to have the dress because it is beyond amazingly cute.  So I didn’t count those into my totals as I was buying them regardless, I only put them in to fill her second basket.

What do you do to save money on Easter?

This website uses cookies to improve your experience while you navigate through the website. Out of these, the cookies that are categorized as necessary are stored on your browser as they are essential for the working of basic functionalities of the website. We also use third-party cookies that help us analyze and understand how you use this website. These cookies will be stored in your browser only with your consent. You also have the option to opt-out of these cookies. But opting out of some of these cookies may affect your browsing experience.
Necessary Always Enabled

Any cookies that may not be particularly necessary for the website to function and is used specifically to collect user personal data via analytics, ads, other embedded contents are termed as non-necessary cookies. It is mandatory to procure user consent prior to running these cookies on your website.