As we wind down to the end of my third (and final) pregnancy, I get asked a lot of questions about how to do Disney while pregnant and still have fun. We were fortunate enough to go twice during this pregnancy, once in the first trimester and once toward the end of the second. While both stages of pregnancy were very different, one thing stayed the same – there is definitely tons of fun to be had at Disney while you are pregnant.

Below are my Top 10 Tips for doing Disney while pregnant and enjoying yourself!

Going to Disney while pregnant can be great fun. There’s an extra layer of magic when the cast members make a fuss about your little mousketeer on the way. If you plan ahead and do it right, you can still have the trip of a lifetime.

Do you have any secrets to successfully doing Disney while pregnant? I would love to hear them!

Fear not, this is not a one way is better than the other debate.  This is simply my story and my view.  I think whatever works best for you is how you should be doing it.

With that being said, I was terrified to go into labor because I had no idea what I wanted to do.  Part of me wanted to breast feed because I know it is better for the baby and I was breastfed and it is just what I am supposed to be doing.  I have many friends who would criticize my mothering if I didn’t breastfeed, not that it would bother me because I think it’s ridiculous, but I also thought if everyone else could do it, then I should probably try.

The other, more practical side of me didn’t want any part of it.  I have other friends who didn’t breast feed and they could come and go as they pleased.  They could leave their child for hours at a time, knowing all the babysitter had to do was mix up some formula and bam, the baby has food.  In addition, if we were out somewhere, they didn’t have to find somewhere private to go (because I am so not into exposing my breasts in public!), they could just mix up a little formula and feed on the go.

I know that I can pump, but that takes time and effort.  I am barely organized enough to clean the house and remember to grab the coupons I need to get to the store, how am I going to label and store breast milk.

This was a decision for me that literally came down to the last few days.  Even in labor I was confused.  I brought it up to Kevin at about 6 centimeters dilated and he basically made the decision for me… breast.  He reasoned that because I quit my job and money has been tight until I can go back to work at least part time, that I should try my hardest (he understands that some women just can’t do it) to breastfeed for, if no other reason, to save money.

This sounded fair enough and since I already checked my insurance and found that they covered my Medela pump at 100% I would give it a try.

Thank God I did.  I really think it is my favorite part of being a mom!  I absolutely love the time I get to spend with my little girl, just the two of us.  It is also a time I use for my own quiet time and reflection (and a little iphone Facebook stalking when I start to get bored!)  It has come so naturally for me, I now pray I never need to use formula!

If you are a mom on the fence, I will tell you to give it a try.  All of my fears are gone and I think because I was so on the fence about it and really felt I could go either way, I never got nervous that it wouldn’t work.  I really believe it is because of my relaxed state that I never had any problems and it was never frustrating for me or for Lily.  I will continue to maintain my stance that whatever works for you is what is best for you, but I am so glad I tried it!

Well, my plan to find a journal on October 5th kind of got pushed to the way side.  After I finished blogging Thursday night, I just couldn’t sleep.  My mind started racing with all of the things I needed to get done and, since I wasn’t tired at all, I figured might as well start now.

I went downstairs, quiet not to wake my husband or the dog, and started cleaning the kitchen.  I did the dishes, loaded the dishwasher and ended up scrubbing down the whole room.  After that I cleaned up the dining room and started working on coupons for the next week’s shopping trip!  At about 2 a.m. I figured I should try to sleep since Kevin was going to work from home Friday and we had plans to go to breakfast and take a nice walk to encourage labor.

Well, at 3:30 a.m. I woke up with absolutely horrible pains in my back that radiated around to my abdomen.  I thought to myself, no way this is contractions just go back to sleep.  About 10 minutes later I had another, and another, until, finally, at 4 i woke Kevin up.

He shot out of bed like a bullet from a hot gun.  Grabbed his glasses and he was by my side in the bathroom in seconds.  I told him I wasn’t sure but I was thinking this is maybe labor.  We timed these “contractions” for an hour.  They were about 8 1/2 minutes apart by this point, but I dill not believe it was really contractions!  After the hour, I figured I would give my doctor a call to be safe, but I was determined to take a shower first so I would be nice and clean if I did get admitted!

After I felt all clean, the doctor finally called back and told me to come on in that it sounds like labor!  Kevin practically ran out the door.  I was laughing because I knew it was early and there was no need to be rushing around yet.  I sat down and spent some time with Comet explaining what was happening and that mommy and daddy may be gone a few days but will bring him back a little sister!

At that point Kevin practically threw me in the car and off we went on our 35 minute drive to the hospital.  As if I wasn’t in enough pain, it was right in the middle of rush hour traffic, so it took us almost an hour to get there!  I thought I was going to die!

They put us in the triage area and hooked me up to a monitor that showed both the baby’s heart rate and my contractions. The doctor was in a c section so while he was finishing we were just waiting.  He finally came in around 10 a.m. and checked me and told me I was still only 3 cm dilated (which is what I was the day before at my appointment!) Since I had not changed he contemplated sending me home but I complained that we lived too far away!  He told me to start walking and he would check me again at noon.

Well, we made it barely 15 minutes of walking and I thought I was going to die, so we went back to the room where I could bite the sheets and pray we could be admitted!  Well, it worked!  I made it to 4 by noon so we were staying.  And then, just like that, holy crap it got real!

I was so nervous about both the IV and the epidural I was shaking.  My nurses were absolutely fantastic and those went fast and virtually pain free (the epidural hurt a little but who am I kidding — they could have stuck it in my eyeball and I wouldn’t have cared as long as they took away the painful contractions!)

At 9:00 something happened that surprised me beyond belief and if you would have asked me even a day before, I never would have thought it would happen…. I had a panic attack and “needed” my mommy!  I was hysterical and poor Kevin had no idea what to do.  So, I did what anyone else would do… I called Mrs. Stanko and asked her to come be with me.  She is most like my mom anyway and I really needed someone to calm me down.

As soon as she got there, the nurse said it was time to start pushing.  I was scared, but so ready.  With Kevin on my left and Mrs. Stanko on my left, I pushed for an hour and a half.  The nurse smiled and said she was going to get the doctor.  I thought to myself “this is it! A few more and she will be out.”   Wrong!!!!

The doctor came in, had me push and then explained that the baby would not fit and there was no other choice but to finish with a C Section!  I was devastated… especially after being in labor so long!  But by then the baby’s heart rate was going up and so was my fever!  Off to the OR I went and after 20 minutes the doctor yells “Happy Birthday Liliana!”

Tears of joy streamed down my face as they told me she was perfect and everything was going well.  After cleaning her up, they handed her to Kevin who got to hold her for the rest of my surgery and then after I was on my way back to my room, I finally got to hold her!  I was so exhausted but beyond excited!  We are so happy she is here!!!! 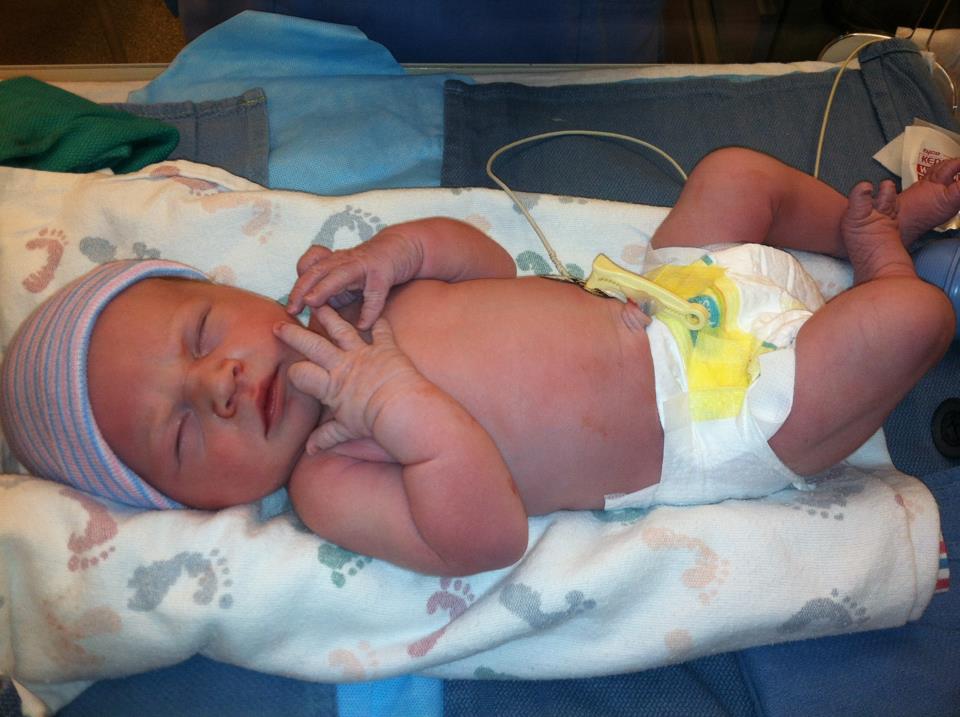