It’s my 100th post!  And what a great one it is!  My journey to my first half marathon and now that I can feel my legs again, it was awesome!  RunDisney puts on one heck of a great race and I can imagine that no other race is half as amazing!

I should start out by mentioning my training.  Oh, that’s right, I didn’t train.  Like, AT ALL!  I literally ran 3 miles maybe two or three times leading up to the race.  My friends thought for sure I was going to back out.  Nope, not here!  I used the couch to half marathon approach.  Not the really good training program like C25K.  Nope, one day I was happy on the couch, the next half marathon finisher.  As awesome as it was, I totally do NOT recommend running it without training.  Especially if you want to enjoy the rest of your WDW vacation!  I was in some serious pain and was pretty much out of commission for the day of the race!

The morning of the race was nice and warm, in the high 60’s, which was amazing, but with 100% humidity, less than amazing!  We were at the bus stop at 3:30 a.m. at the Boardwalk resort.  I was surprisingly calm and focused without too many nerves.  Mainly just anticipation for the unknown.  Luckily we only had to wait a few minutes before the bus came to take us to the starting line.

My awesome friend Katie, who was so sick before the race, designed these awesome shirts for us all to wear!  It was great having friends to hang out with in the pre-race area.  We stretched, looked around, had pictures taken and then started the walk to our corrals!  One thing they totally don’t tell you is that you are really moving your body for about 15 miles by the time you even get to the starting line.  We took the hike to our corrals and this is the part that I got the most nervous for.  All of my friends were in corral P and I was in N.  Not sure how that happened, I think it was a miracle.  P is the last corral, where the balloon ladies (aka sweepers) are and I was so nervous about being swept!  I could have started back with them, but I felt it was safer for my race to start in N and give myself the extra 15 or so minutes. 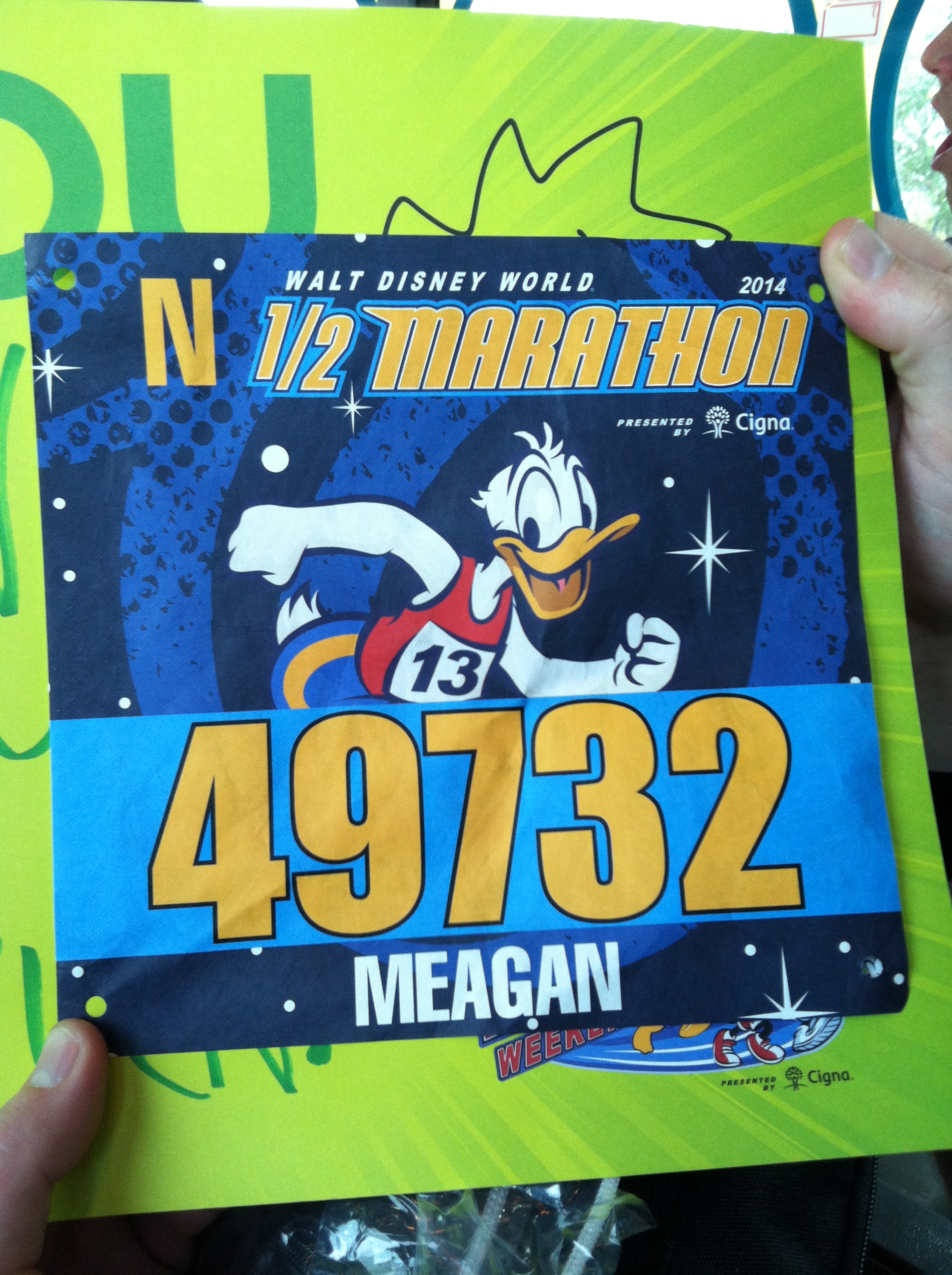 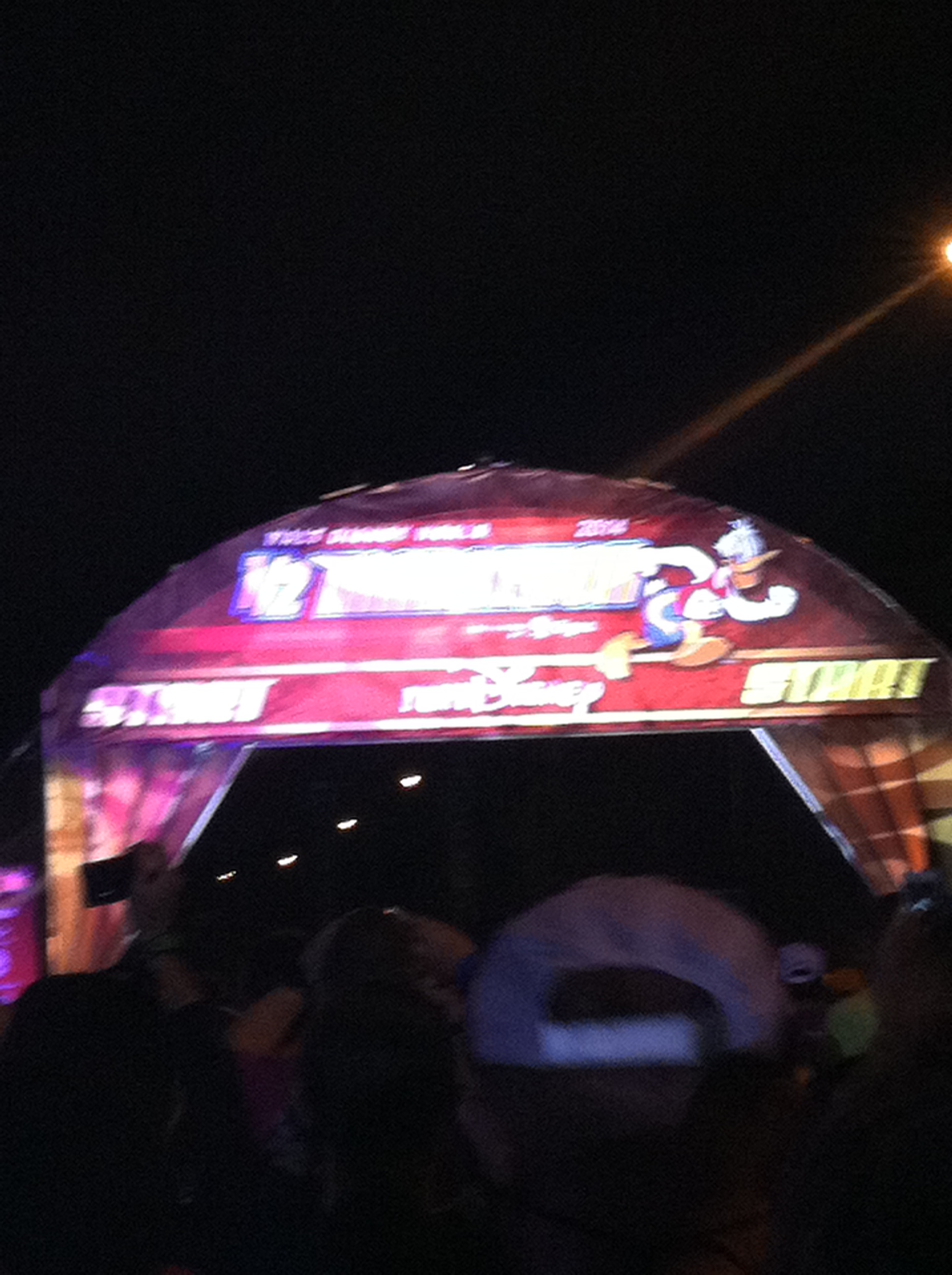 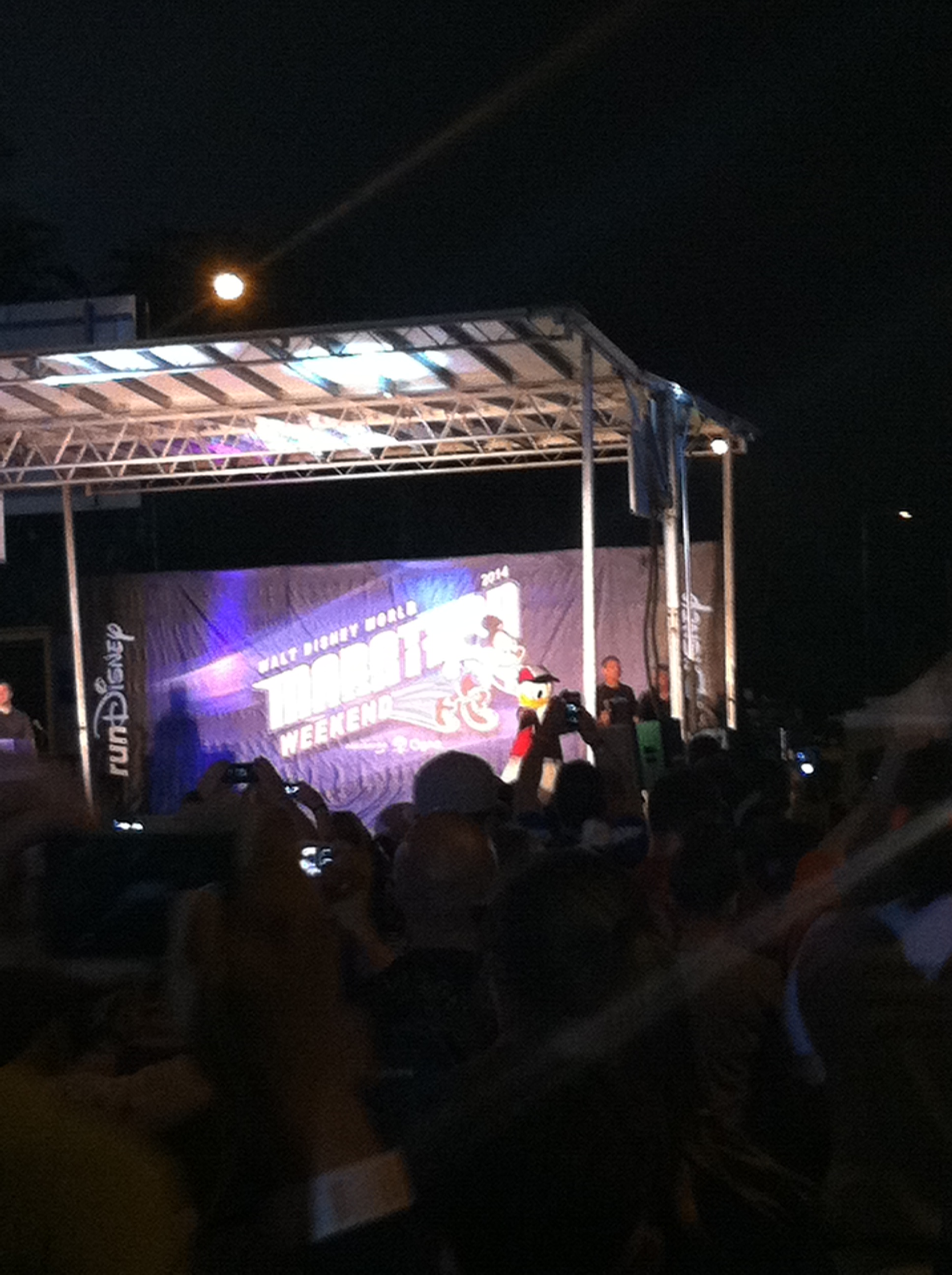 I am pretty outgoing and friendly, so I made friends with some people in my corral and even found two running buddies, an older couple who seemed to be targeting the pace I was (slow).  I also was hanging out with a few locals who were running the Dopey Challenge.  Seriously a good name for it, as they were running the 5K Thursday, 10K Friday, Half Saturday and Full Marathon Sunday.  They are seriously crazy!  Before I knew it (or a few hours later) it was time to start.  There at the starting line was my main man, Donald, ready to count it down!

Annnnd we were off!  It turns out my older couple friends were much slower than I anticipated I would be, so I ran off ahead!  I ran the first mile and it was seriously awful.  I thought multiple times that I was just going to be done and that I tried and failed and it’s my own fault because I didn’t train.  I turned my headphones up hoping for a miracle when I heard a girl in front of me yell “3-2-1 walk” and her group of 4 started walking.  After a minute or so, she yelled “3-2-1 run.”  Someone on the other side of me asked what their pace was and the girl said they were walking 60 seconds, running 30.  I looked at the girl on the end and said “mind if I pace with you” since I knew that I could do that.  And those 4 girls got me through the race.

Turns out they are part of the running club Running Of the Ears (which I am now a member of too!) and Janice, Angie, Ashley and Sarah were amazing to run with.  One thing I never thought I would do was to pull out my headphones and run the entire thing (minus 2 miles) with no music.  I didn’t need it.  We talked, we laughed, we ran, we walked and we enjoyed every magical mile as much as we could! 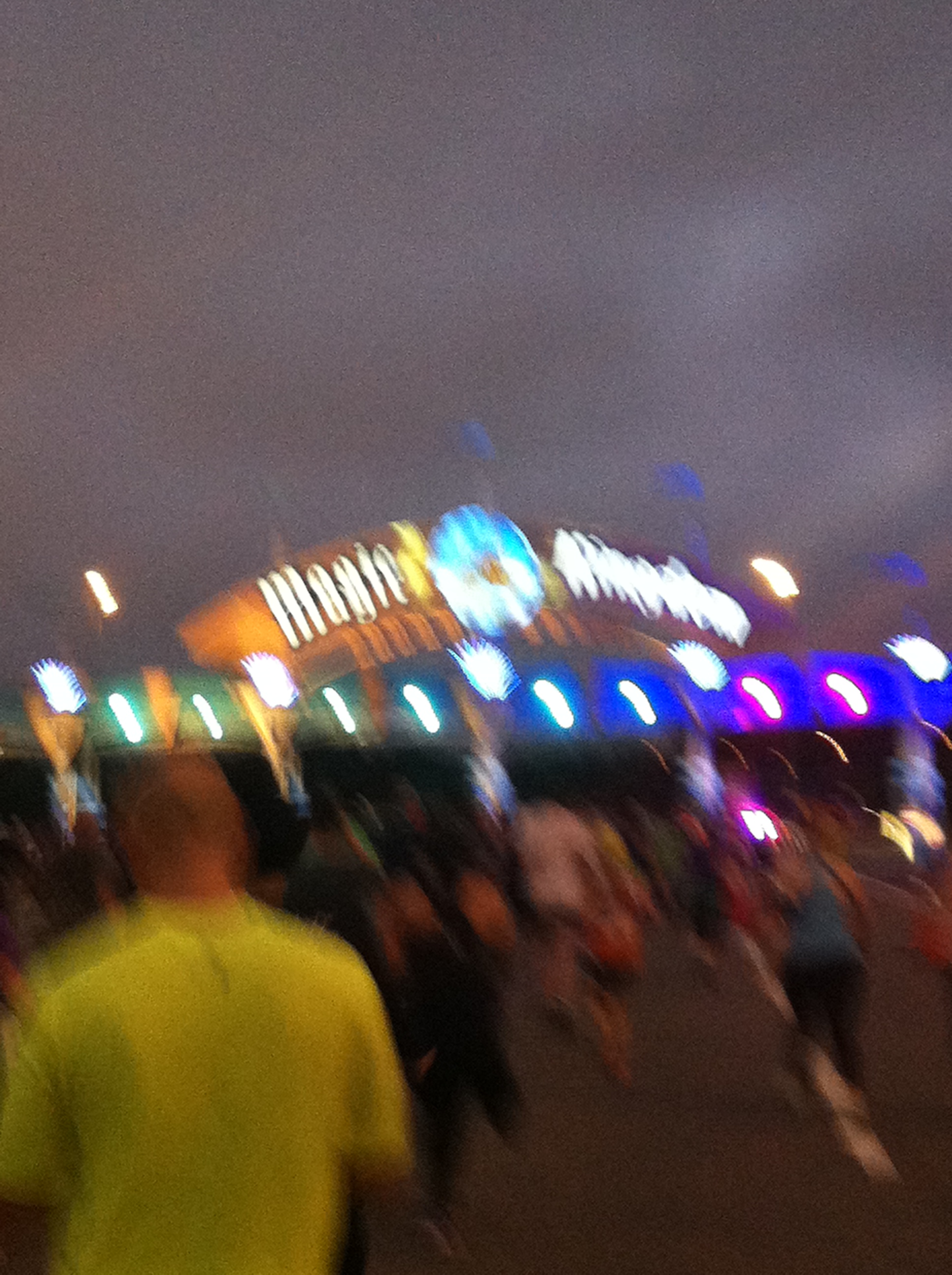 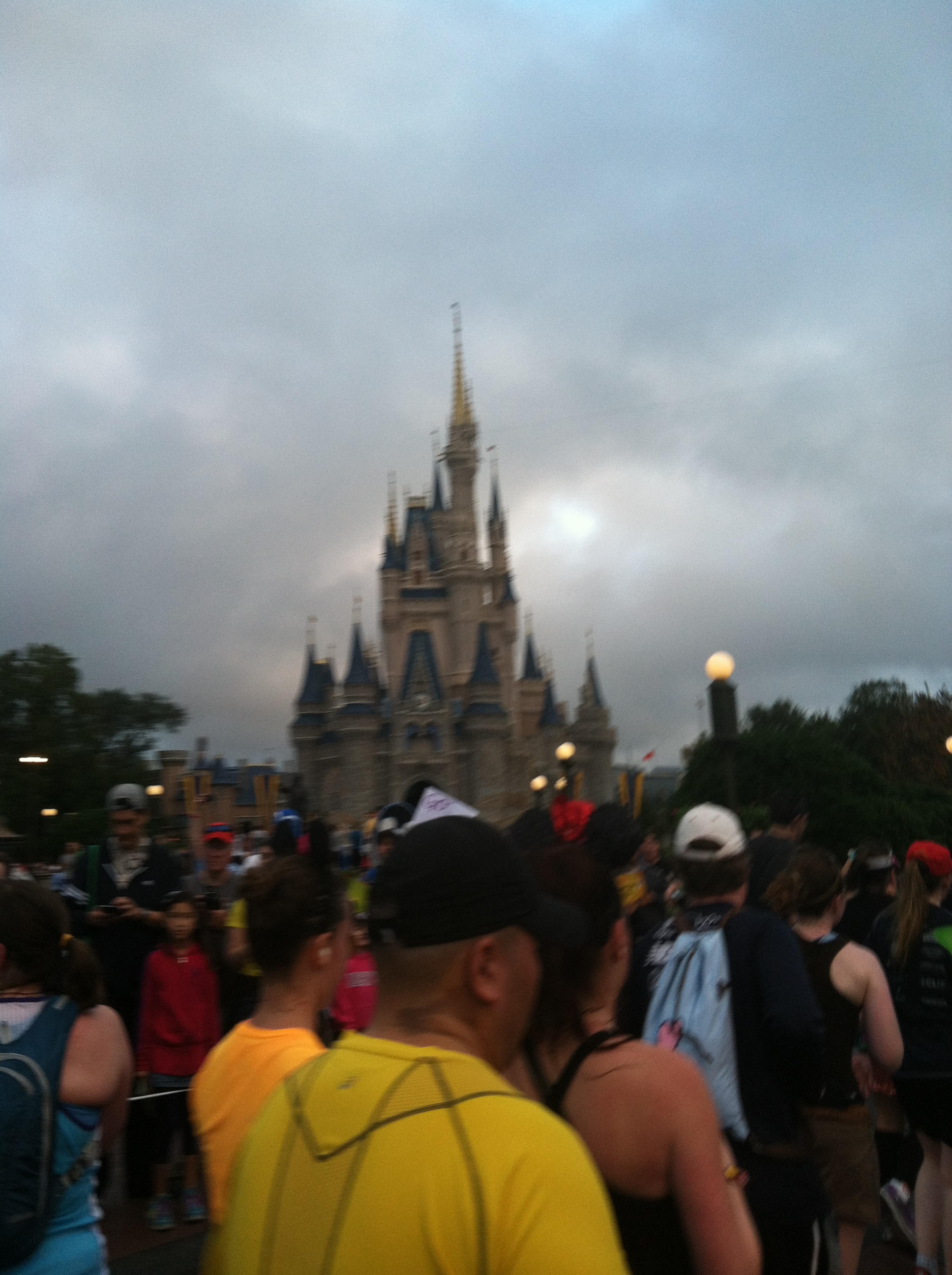 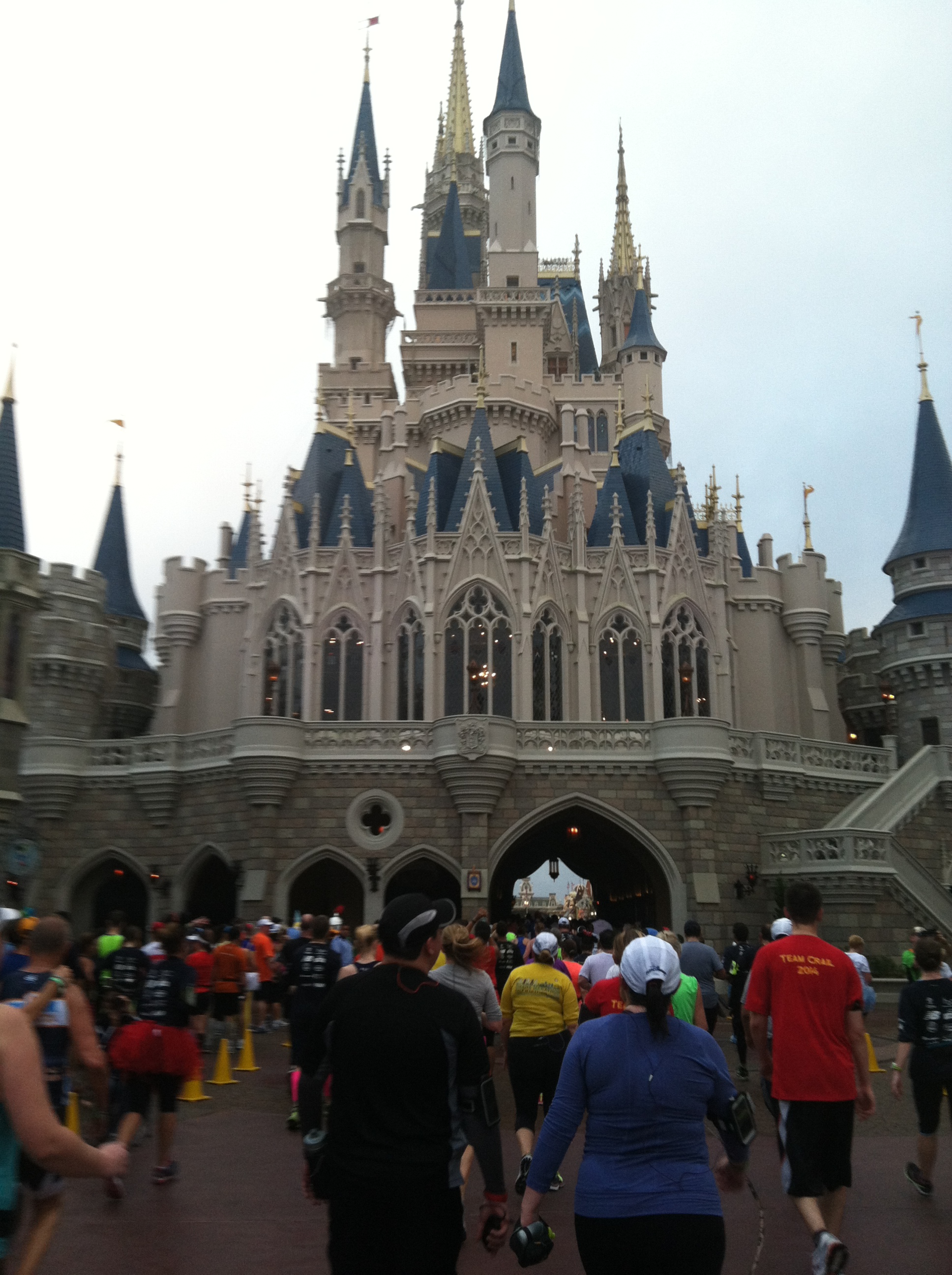 Sorry for some of the blurry pictures, I was running of course!  I ended up running about 6 miles and walking the other 7 which was amazing for my first run and also because Angie was nursing an injury we hung back and walked the last 3 miles (which I was more than thankful for as I was hurting by then!)

The course itself was magical and they do a great job of on course entertainment, from characters to DJs to the spectators.  It was great.  The downside was that it was very narrow at parts and there were some parts that were so congested you couldn’t run.

I also struggled pretty bad from miles 7-10 coming out of the Magic Kingdom and knowing the rest of the course was highway.  But I made it and we had a great time!  Lily and Kevin were at the finish line cheering me on as I crossed and I met up with my friends immediately following (they all finished before me!) 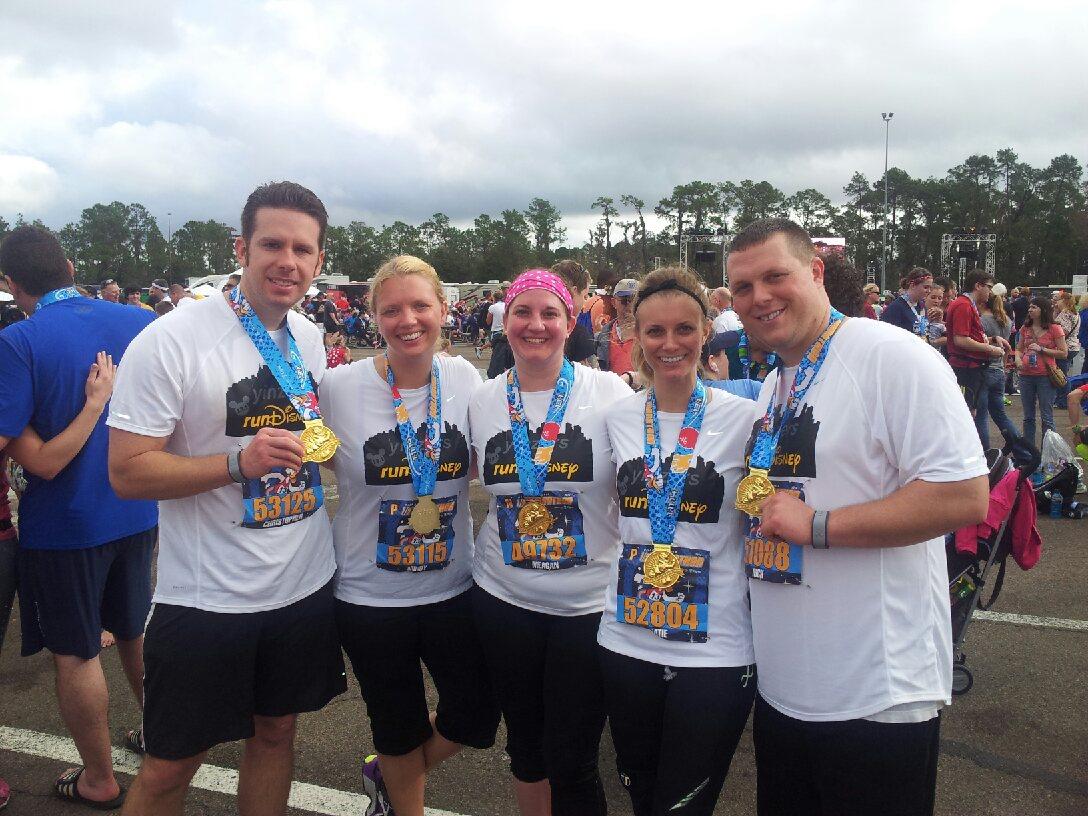 All in all, I may run another one…. someday!

I was always taught as a child to dream big.  I was raised on Walt Disney’s philosophy of “If you can dream it you can do it.”  I have about six figures or plaques with that saying in my house.  And I totally believe it.

This is my 30th year of life, and although 30 is not old by any means, it is a milestone that sends me running to my bucket list to see how much I have left.  Ahh the bucket list, my goals and dreams in life.  I started this list when I went to college and I have been able to cross off a few things, like go to Europe, see a tornado (I’m totally counting a water spout on our cruise) and go on a Disney cruise.  Those were all amazing things but I have SO MUCH MORE to do and see on my list.

One big dream of mine is to run in a Disney race.  The good news is in 145 days I will be running 13.1 magical miles in Walt Disney World.  The bad news is, I have never been a runner and my training needs to start immediately.  My legs hurt just thinking about it.  I’ve been trying to get myself pumped by watching Youtube videos of the 2013 half marathon and all I come up with is looking at the mile markers and thinking “dear God, what have I done!”

In all reality, I am very excited!  Now I get to get some new shoes and some new workout clothes and start hardcore training!  To be fair, I did run in high school.  I was dating a soccer player and I was a cheerleader.  We both practiced until about 9 p.m. a few days a week.  We would meet after practice and run two miles at the track.  This was by far the healthiest relationship I ever had!  But those days are long gone and I’m not even sure I can run to the mailbox without getting winded.  Looks like the weeks ahead should be pretty interesting!

I.Will.FINISH.  I will push hard.  I spent $160 on this race — I will come home with that medal!   If there is ever somewhere I can do this, it is at Disney.  I want to conquer and enjoy every magical mile!  Bring it Mickey!